The 9 forms or appellations of Goddess Durga or Shakthi as per various Hindu scriptures are the following. 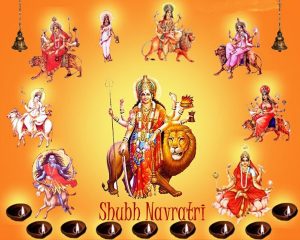 Shailaputri: Also known as Parvati or Himavati, she is the daughter of Himavan (king of Himalayas). The name literally means daughter of the mountains. A manifestation of the power or energy behind the Trimurtis, she is depicted as riding a bull and carrying a trident and a lotus.

Brahmacharini: The name literally means one who practices devout asceticism. She is the way to enlightenment or moksha and is depicted in a white sari, carrying a rosary and a water utensil.

Chandraghanta: She gives the strength to fight all evils. She is shown as having a golden complexion with 3 eyes and 10 hands. She rides a lion and carries weapons in her hands. She has a Chandra (crescent) on her forehead in the shape of a ghanta (bell) and hence the name Chandraghanta.

Kushmanda: She is the Goddess of the cosmic egg and is considered as the creator of the universe. She is depicted as having 8 hands holding weapons, rosary, lotus etc. and riding a tiger or a lion.

Skandamata: She is the mother of war, god Skanda or Kartikeya and hence the name Skandamata (‘mata’ means ‘mother’). The chief commander of Devas in their war against demons, she is depicted as having four arms and three eyes. The Goddess is shown as seated on a lotus or riding a lion and she holds the infant Skanda on her lap.

Katyayani: She is the daughter of Katyayana rishi, born in the Katya lineage of saints. The legend says that the saint wished to have the Goddess as his daughter and underwent long austerities to receive Mother Goddess’ grace.

Kaalratri: She is one of the fierce forms of Goddess Durga and is believed to be the destroyer of all evils and negative energies. She is depicted as having a fierce look with a dark complexion, disheveled hair and burning bright eyes. She rides on a donkey and carries a blood-drenched weapon.

Mahagauri: The name literally means extremely white. The Goddess is white in complexion and very beautiful. She is depicted in a white sari with four hands and riding on a bull. Her upper right arm is in the pose of allaying fear and lower right-hand holds a trident. She holds a damaru (tambourine) in her upper left arm and the lower left arm is in the form of a blessing.

Siddhidatri: Siddhi means supernatural power and Dhatri means the giver. She removes ignorance and gives the knowledge to realize Brahman or ultimate reality. She is depicted as seated on a lotus and is four-armed. She holds a lotus, mace, Sudarshana Chakra and conch shell on her four arms. It is mentioned that Lord Shiva worshipped her and was blessed with all 8 siddhis – Anima, Mahima, Garima, Laghima, Prapti, Prakambya, Ishitva, and Vashitva.

These 9 appellations of Goddess Shakthi are respectively worshipped on the 9 nine days of Navratri. Different poojas and observations are associated with each of these appellations. Yet, we can find variations in names and forms in different regions of India. The forms of Devi/Goddess worshipped vary with the regional traditions. Kali, Jagadamba, Annapurna, Sarvamangala, Bhairavi, Chandika, Lalita, Bhavani, Mookambika, etc. are some different names/forms worshipped during Navratri.